Waitrose is the place to shop tomorrow, or so it seems! The upmarket retailer has snagged itself a bunch of interesting beer exclusives, and Monday 13th November is when they’re due to arrive on the shelves. (edit: maybe wait until later this week before going in - if my local branch is anything to go by, they'll go on the shelves as and when the delivery happens and the staff have time...) It’s not just the Fuller’s & Friends mixed six-pack of collaboration brews, which I’ll write more about in a moment – the others I know of are two more bottled Fuller’s beers, namely the 10.7% Imperial Stout 2017 and Vintage Ale 2017, and an exclusive beer from Thornbridge.

The latter is a Gose made with watermelon juice. Originally brewed by Londoner Josh Smith, it was the winner of the Waitrose-sponsored 2017 Great British Homebrew Challenge, and one of the prizes is this competition is to have your beer brewed commercially by Thornbridge. The beer’s name, Mr Smith Gose To…, references both its brewer and the 1939 Frank Capra film, ‘Mr Smith goes* to Washington’. 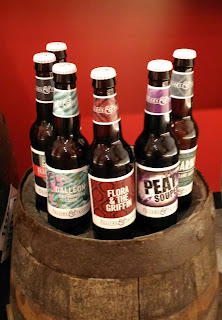 By coincidence, I met Thornbridge’s head brew Rob Lovatt, who was one of the Homebrew Challenge judges, at the launch of Fuller’s & Friends – he is also one of the latter. He noted that one of his aims with the 7.1% Fuller’s/Thornbridge brew, a Red Rye Ale named Flora & the Griffin after the two breweries’ mascots, was that it would age well in bottle – all six F&F beers are bottle-conditioned.

Explaining the F&F project, Fuller’s head brewer Georgina Young said that although the idea came from her predecessor John Keeling, who is now brewing director and brand ambassador, a lot of the drive behind F&F came from Fuller’s marketing department and from Waitrose itself – after all, you can’t do something like this if you don’t have an outlet for the results.

Essentially she paired each of her six brewers with another brewery, each pairing discussed what they would brew, where possible they did a pilot batch at the other brewery – these were the beers that appeared in cask at London Craft Beer Festival and a few other places back in the summer – and then they brewed and bottled the full production batches at Fuller’s during the autumn. “My team have really shown their capabilities, working with their partners,” she said, adding with a grin: “I haven’t been involved in brewing any of the beers, I just wielded the big stick!” 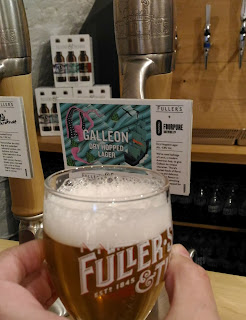 She presented the six, and their brewers, more or less in order of ABV, so first up was the 4.8% collaboration with Fourpure, which is also the only lager in the set. Some have already given Galleon dry-hopped lager the new-fangled tag of India Pale Lager, or IPL, but it’s much more about aroma and flavour than bitterness. The brewers were keen to use the new Loral hop; it has floral qualities so they then paired it with the grape character of Nelson Sauvin hops.

I’ve had dry-hopped lagers before so wasn’t expecting a lot, but Galleon – the  beer's name is meant to reference the meeting of old and new on the Thames – really impressed me, especially as I was incredibly lucky to try it cask-conditioned from a handpump, as well as in bottle.

As Georgina explained, “We thought for fun we’d run off a firkin [cask] of each beer. I’m not sure it’s right for all of them…” Well, I don’t know about the latter, because this cask lager was excellent – fresh lemony malt overlaid with spicy-sweet and floral hops, and a mild pleasing bitterness. It’s also quite possibly the first cask beer that kegophiliac brewery Fourpure has ever produced, and it showed just what they are missing by shunning cask.

Next up was what was probably my favourite of the six, albeit just a nose ahead: Matariki, a New Zealand Saison brewed with Manchester’s Marble. Dry-sweet and lightly funky, with notes of golden malt and grapes, it was best on cask which gave it a slightly creaminess, but is still jolly good in bottle. Its name is a nod to the seasonal origins of the style, said Hayley Marlor, the Fuller's half of the collaboration – Matariki is the New Zealand name of a constellation that appears around harvest time.

Rebirth, the 6% collaboration with Bristol’s Moor Beer that takes the original 1971 recipe for Fuller’s ESB and gives it a 21st century twist, was the only one I’d already tried on cask back in the summer. Where that version was lightly resinous and jammy, with herbal bitterness, this one is more toffee and marmalade, with bright hoppiness. "We did tweak the recipe slightly as we had it too dark, but it is the same beer," said Moor’s Justin Hawke, adding that the other difference from the pilot is of course that he brews all his beers unfined.

He added that, coming from the US where Fuller’s ESB is a classic that has spawned an entire beer style, “I had expected it to be 100 years old, and was surprised to find the first brew was only in 1971!” The ESB recipe has been revised since then, bringing the ABV down and eliminating the adjuncts to make it all-malt. Said Justin, “The old recipe has US, Australian, Slovenian and UK hops, so we decided to update it to what it could be if it used fresh hops from those countries today.”

I’ve already mentioned Flora & the Griffin – it’s sweet and faintly tart, with hints of caramelised and spiced nuts – so next up is the 7% New England IPA, a collaboration with Manchester craft beer darlings Cloudwater. NE IPAs are all about thick hop flavours and aromas, rather than bitterness, so as Fuller’s Henry explained, the planning for this was all about how much hops they could get in at every stage of the process: “It was, would we still be able to empty the fermenter if we put in 80 kilos? At every point I’m thinking ‘Will this beer get out of this vessel?’ – and it did!”

A notable oddity is that where NE IPAs are usually cloudy, this one came out clear – “I don’t know what happened there,” said Henry. I checked though, and it was also one of only two beers in the set that weren’t pilot-brewed. The justification was that Cloudwater rarely repeats its beers, but I fear it showed. It’s definitely not a dud – it’s a nice beer, richly hoppy and fruity-crisp – but I suspect it’s not what it could or perhaps should have been. 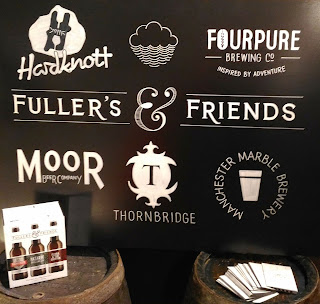 Also 7% but saved for last as it is both the only dark and the only smoked beer in the set, is Peat Souper, a collaboration with Cumbria’s HardKnott that was designed as a way to make HardKnott’s impressive Rhetoric #4 12% Imperial Stout more accessible by hybridising it with Fuller’s Black Cab and London Porter. And amazingly, it works! If you know the three beers, you can detect them all in there - rich and lightly smoky Rhetoric, chocolatey Black Cab and faintly roasty and vinous like the London Porter.

Hardknott’s Dave Bailey said the biggest problem had been the amount of notoriously pungent peat-smoked malt in the recipe, which Fuller’s staff had worried would taint subsequent brews in the same vessels. They suggested halving the amount, but he stood firm and eventually won – they had to start at 4am as the last brew of the week, but were able to use the peated malt because the brew was timed just before those particular vessels had their six-monthly overhaul and extra-deep clean.

All in all, Fuller's & Friends is an impressive project. The beers demonstrate variety and innovation, yet at the same time they are all about accessibility and drinkability, rather than pushing the extremes. Not every brewery can achieve that, but as Rob Lovatt noted, “I have great respect for Fuller’s. Drinkability is something Fuller’s has down to a tee, and other brewers could learn a lot from that.“

The value for Fuller's – which as Georgina Young says, now "embraces doing collaborations with partners big and small" – seems clear too. Of course, the big thing is the marketing opportunity, and you can certainly see why they're pitching the boxed set as an ideal Christmas gift for the beerily-inclined!

But there's also the 'rising tide that floats all boats' aspects. All the brewers involved seem to have learnt something, whether it's guests who normally brew on something eight or ten times smaller and non-automated, or Fuller's brewers who had never manually dug out a mash-tun before! And just as importantly, they all appear to have had a great time.

*I’m afraid that when I see attempted puns like this, my first thought is that someone doesn’t know how to pronounce Gose (hint: “Go-ser”). Ah well, never mind – I plan to buy and try the beer anyway!
at 10:30 pm