A Goose on the Thames 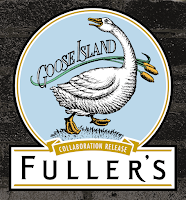 2018 is Goose Island's 30th anniversary, and last week, Fuller's – which was a major inspiration in the Chicago brewery's founding – threw its young cousin a birthday party in London. Pride of place went to the 30th Anniversary Ale, a 5.9% collaboration brew based on Fuller's original ESB recipe, but with modern and experimental US hop varieties.

It's a beer that's been available in the US since early May, but not here – kegs were brought over specially for the party at The Hydrant, a Fuller's pub named for its location next to the Monument to the Great Fire of London. Also getting a relatively rare draught outing there was Fuller's 2017 Vintage Ale in cask, so I'm afraid my first question for Goose Island president and general manager Ken Stout was: how come the Anniversary Ale isn't in cask too?

"We do quite a few cask beers, but the only place we serve them is in our own brewery tap," he said. He explained that it's the same problem so many British craft brewers have with cask beer – you're totally reliant on the skills, or lack of them, of the pub cellar manager.

I'd just come from a CAMRA meeting where those who couldn't get to the recent AGM (where votes were taken on adjusting CAMRA's aims to widen its campaigning remit and educational coverage) could hear and discuss reports from delegates who were there. So Ken and I went on to talk about why there's still this perceived divide between cask and keg – he's a big fan of British cask ale.

He loves classic Bavarian beer too, so we also talked about what's going on with German craft beer (with almost everyone now making Pale Ale and/or IPA, German and even Bavarian PA/IPA have emerged as genuine substyles, but the aficionados and beergeeks have moved on to Porters and Stouts, preferably barrel-aged Imperial ones…); about Franconian Ungespundet which is Germany's equivalent of cask-conditioning; and about Goose's collaboration with fellow AB-InBev property Spaten last year. The resulting Keller-Märzen was served at the Goose Island London Block Party last September, and like the party it was excellent.

It got me thinking: here's two macro-owned breweries, but they're still making great beer, and they seem to be getting nothing but help and support from their owners. Is this, and not the dumbing-down that many assume will follow when you 'sell out to big beer', the real threat from macrobrewers buying into craft? That the result will be too good – or at least, plenty good enough – and too well resourced for others to compete? I'm going to have to think (and write) some more about this…

Ken also introduced me to Andrew Walton, the newly appointed head brewer for Goose's Shoreditch brewpub, which is due to open in September – there's already brewpubs in Toronto, Seoul and Shanghai, as well as the original one in Chicago of course, and we're next. Andrew is from Canada, but has spent the last couple of years brewing in London, at Fourpure.

Samples of Belgian-brewed Midway are air-freighted back to Chicago so they can be tasted for consistency with the US version. If there's one thing companies like AB-InBev understand and can help their craft brewers with, it's expertise in quality and consistency management. Interesting times, eh?
at 3:19 pm