Last Saturday's London Brewers Alliance beer festival, in the brewery yard at Fuller's of Chiswick, was the best beer festival I've been to in a long while. Forty London brewers there – and I mean brewers, as it was a chance to meet the people who make the stuff – from breweries of all sizes and many ages, from recent 200-litre start-ups to well-established London regionals, all pouring their own beers in the hot midsummer sunshine.

Add in superb organisation by the Fuller's and LBA team led by John Keeling, who is both LBA chairman and director of brewing at Fuller's, and the LBA's John Cryne, and the day was complete: Plenty of bars (40 of them!) and all of the same size regardless of the brewery, plenty of tables and benches, supplies of drinking water, and of course plenty of portaloos – although quite how they also wangled the gorgeous weather I'm not sure!

It was only after John Keeling briefly stopped by our table, looking a little tired but sounding immensely relieved – "Everything arrived late, but we still opened on time," he declared – that I realised what an achievement this had been. Despite the quiet of a Saturday afternoon and the rustic charm of its old buildings, clad in historic Wisteria, during the week Fuller's is a working industrial site. 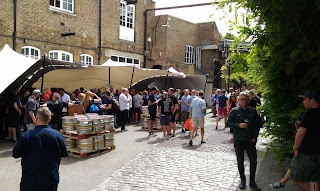 That means the festival build can't have started in earnest until after the brewery shut down on Friday afternoon, and after the Friday evening traffic on the Hogarth Roundabout had subsided. Indeed, David Scott of Kew Brewery said on Twitter that he was the first to deliver beer, at around 7pm.

Given that, it's no wonder that the vast majority of the beer was in keg form. Breweries were limited to two keg taps each, although some also brought cans and bottles, and a few – including the hosts – also had cask beer on a stillage in what I think of as the carriage house, opposite the brewery's reception office (it's the building straight ahead in the queue photo above).

I went with the intention simply of enjoying the beer, the sunshine and the company. Somehow though, old instincts were impossible to shake off and I found myself making notes as I chatted with brewers I'd not met before. Here's a few of the snippets I picked up… 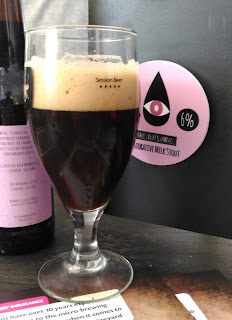 Some of my beer-friends hadn't encountered ORA Brewing before, so wanted to find their bar. When eventually we did find it, I realised I'd been intrigued by their Balsamic milk stout before – so I asked for some more! Turns out ORA started as a homebrewery in a garage in Modena, Italy, but moved to London six months ago. They're brewing at UBrew in Bermondsey while they look for their own site.

Pietro said the Balsamic has 8g per litre of Modena barrel-aged balsamic vinegar – he's at pains to point out that this isn't the more acidic vinegar we're used to here, but a thick, sour-sweet and caramelly sauce that goes well with desserts and even ice cream. It explains both some of the creamy chocolate character in the stout and the faint tartness that I noticed when I first had the beer, which made me wonder then if it had been vat-aged. 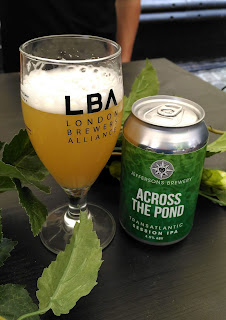 Jeffersons Brewery I'd read about briefly in London Drinker, and I was curious because even though I'd not seen their beer before, it turns out they're more or less local to me, over the river in Barnes. It's just a 200-litre nanobrewery for now, run by the Jefferies brothers – I talked with George. It was great to hear from him that everything they do is real ale, even the kegs and cans – the Across the Pond session IPA was certainly in good form.

Somewhat unusually – several others I spoke to at the festival mentioned using mobile canners, such as Them That Can – Jeffersongs do their own canning on a small can-seamer (sealer). George had good news and bad – they're upgrading to an eight-barrel plant, but can't find a brewery site anywhere around Barnes. They don't want to go far though – "We will probably end up in Putney or Wandsworth," he said. 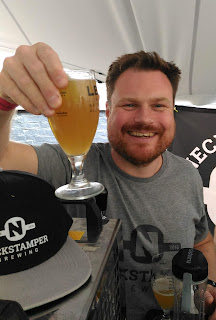 There were a few breweries that were completely new to me. One was Neckstamper Brewing, set up two years ago and now producing some fine IPAs – I tried both the Elbow Crooker Session IPA and the Mizzle New England IPA. "It's me all on my own, trying to balance brewing and selling," said brewer Adam Jefferies (yes, another one!). He now has a Saturday taproom open as well – had we known, we could possibly have added it to the other week's brewery crawl. "We're not far up the river walk from Beavertown and Pressure Drop," he said.

Two Tribes is a brewery name I knew, but without any idea where they were from. Turns out it's mostly based in Horsham, where it grew out of King Beer (and before that WJ King) and still has the 25-barrel commercial brewery. However, it also acquired a brewery site in Kings Cross not long ago for its taproom and experimental brews, and this now seems to be its HQ. On tap were Non Binary, a passionfruit Gose, and To The Bone, a Vienna lager, both of which were decent.

Lastly for now, Spartan Brewery I visited on my last trip to Bermondsey, but at that point it was an almosth-empty railway arch. They've now got their brewkit in, and as brewer Colin proudly told me, "We did our first brew two weeks ago." He was also making a bid for the freshest beer at the festival, as it has only been kegged at 5pm the previous afternoon!

Well, that's all the ones that were new (or mostly new) to me; there were of course about three dozen more, many of whom I also paid a drinking visit to...
at 9:29 am