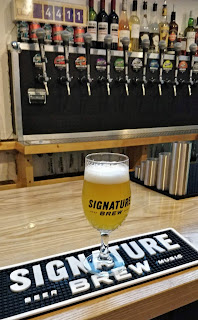 It's all change at London's Signature Brew following an oversubscribed crowdfunding campaign last year - new brewery and taproom, new logo and cans, and even a few new brews - new to me, at least.

The launch party at the new site is taking place this weekend, and there’s lots of shiny stainless steel on show. Given the brewery's history of collaborating with bands to create one-off beers, of course there's quite a bit of live music too.

There’s already a Signature Taproom in Haggerston, London E8, so the new site’s drinking space is instead called The Brewer’s Bar. For this weekend’s launch there’s also tables and benches in the yard outside and on the open area in the brewery proper - I’m told these will also be out once the Brewer’s Bar is open regularly, which is set to be Friday/Saturday evenings and Saturday/Sunday afternoons. At this time of year, the open areas are a tad chilly, but the bar itself is enclosed and warm!

Inside the bar there’s various mementos on the wall of the brewery’s history and its musical collaborations, from its origins in 2012 when it contract-brewed, to 2015 when they got their own brewkit, which they outgrew within four years.

I had a chat with Chris, one of the assistant brewers, who filled me in on some of the changes. Although the actual ‘brew length’ hasn’t changed massively - the new brewkit is 32hl (20 barrels) where the older was 24hl - the new one is much more modern. In place of a manual two-vessel system, they now have a four-vessel system with lauter tun and whirlpool, so brewing is easier and faster.

Alongside a set of 32hl fermenters, they also now have six 120hl (75 barrel) fermenters for core beers such as Roadie, Backstage IPA and Studio Lager - big enough to get three brews into each. They’re currently brewing three days a week, two or three times a day. One of the advantages of upsizing your brewkit is quite simply that you can produce more beer in a shorter time and with less effort!

As for the beers, as I discovered when I first met them they’re quality brews. Alongside the regulars I found an excellent 3% hoppy modern bitter - they badge this as a Table Beer, but to my mind it’s more of a Pale Ale ‘light’, a gorgeous Bretted lager (sadly a very limited production run), and a modernist Farmhouse/Saison.

Then there’s the collaboration they did for the recent Brewdog Collabfest, which aims to cram a cream tea, complete with cucumber sandwiches, Earl Grey, scones and raspberry jam, into a hazy IPA. It sounds ghastly, but it’s actually complex and fascinating. They also have a cask containing some of the very last of their original Anthology 10% Imperial Stout, now two years old and tasting quite gorgeous.

Technically the weekend event is ticket-only, but I’m told there should be room for some extra visitors if you’re looking for things to do tomorrow! It’s an easy walk from Blackhorse Road station. Also in the area are the Wild Card brewery, although sadly that’s not open tomorrow, and the intended site of Exale Brewing, which is the new project - again, crowdfunded - from the former Hale Brewing team. Ex-Hale, yeah…

Many thanks to the Signature crew for inviting me over - cheers!
at 11:09 pm