Pub reopening is on the horizon, but will it be a false dawn for the beer industry? 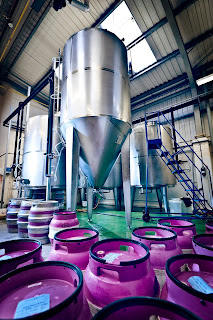 Whatever you might think about the State of the Pandemic, it looks like people are taking early-July seriously as a date for the pubs to reopen. Not only is there quite a bit of chatter on the likes of Twitter from companies eager to sell line-cleaning and other essential services, but I heard the other day that a friend of a friend who is area manager for a pub company has been told he is coming off furlough this week. I suppose by now that means tomorrow...

This all ties in with what I was hearing last week on a webinar on the topic of how Covid-19 is impacting the beer & pubs industry. It was hosted by Katie Wiles from CAMRA’s communications department and Neil Walker from SIBA, the small independent brewers association, and while real ale was a key topic, we discussed a whole lot more.

The first big problem is we don't actually have a date yet. The UK government has a 'roadmap' which suggests July 4th, but what the industry really needs is definitive notification. That's because it’s all very well the government saying pubs can reopen, but as usual the devil is in the detail – and detail is one of the many things that BoJo and the Clown Crew are not good at.

Not only do the pubs themselves need to get everything clean and so on, they also need to figure out what they’ll be allowed to do and sell. Will they need to shift to table service to stop people coming to the bar? How far apart will the tables need to be? Will they even be allowed to serve beer indoors or will it be gardens only? That’d be pretty crap for most town and city pubs!

And then there’s the question of whether they’ll actually have any beer to sell. Neil pointed out that, according to the SIBA survey I wrote about a few weeks ago, most small brewers have slowed or stopped production. They will need at least three weeks to get going again, and preferably four if we want fresh real ale, he estimated.

That’s because even those breweries that have stayed in production have mostly switched to “small-pack”, meaning bottles and cans that they can sell either through retailers – especially for the few fortunate enough to have strong supermarket connections – or for many of them, direct to their fans and neighbours via hastily-built webshops and the like.

Those unfortunate enough to have a lot of casks and kegs in stock have been stuffed. Some pubs and brewpubs have been selling take-away draught beer, but it will have been a tiny volume compared to their usual draught sales. Many brewers will have to scrap that stock or will have already poured it away.

Similarly, there is a lot of beer and cider in pub cellars – around 70 million pints of it, according to the BBPA (British Beer & Pub Association) – and most, if not all, of it will have gone out of date by July. Hence the launch by the BBPA last week of Return Your Beer, a website where pubs can sign up to register that they have destroyed spoilt drinks, which of course they have to do in a legal and environmentally-acceptable way. They’ll then the able to claim duty refunds from the brewers who in turn will be able to claim back what they’ve already paid to the taxman.

This is almost certainly going to be even more complicated and painful than it looks, and not just because of pouring all that beer down the drain, when most of it is probably still perfectly drinkable, whatever the best-before says! I’m thinking more of the admin and paperwork (even if it is digital these days) and of course how long it will take everyone to actually get their money back.

And anyway, this only covers the duty. I know we in the UK are royally ripped off on beer duty and tax so it should be quite a substantial refund, but still, there’s a lot more cost that goes into brewing beer. Will there be grants to pay for all the wasted ingredients? Anyway, it explains a lot of why my pub manager acquaintance is already being called back to work.

Who will actually reopen?

The next big question is how many of those pubs will actually reopen. Neil quoted a number of other studies, including one on business confidence, where only one in three pub operators predicted that all their pubs would reopen, and a BBPA report that up to 40% of pubs could close if they don’t get additional government support. Katie added that the government's business interruption loan scheme "is welcome but too slow to process, and around 20% of pubs can't access it because their rateable value is too high."

Then there was a hospitality industry poll that claimed most pubs can only handle a 10% drop in sales before becoming unprofitable. Requiring drinkers to stay 2m apart could therefore be pretty much a death sentence – although perhaps they’ll take a lesson from New Zealand, where as I understand it, if customers arrive as a group they are allowed to sit together.

And there’s the question of who will venture back to the pub. CAMRA’s research suggests that 60% of pubgoers are looking forward to a pint of cask beer once pubs reopen, but there’s also reports that others will avoid pubs, either because we've all been told to be fearful of being indoors with strangers, or simply because they've got used to drinking at home.
"The big thing we're concerned about is the change in consumer habits," Katie said. "As much as people say they want to go back to the pub, the longer this goes on the easier it will be for them to not go back to the pub."

Breweries and cidermakers meanwhile face a triple-hit. As well as all that out-of-date product that must be dumped and the prospect of lower sales once business reopens, they’re not eligible for the same grants and business rates ‘holidays’ that pubs can get. Many have also furloughed their marketing teams, so getting sales moving again is likely to be rather bumpy.

There is a little bit of better news, in that quite a few breweries have managed to ramp up their direct sales. Katie also mentioned CAMRA’s online Brew2You service, which allows you to find local producers and retailers willing to deliver or sell for collection. It looks particularly useful if you want to find draught beer in polypins or minikegs.

I have my doubts how much of this direct-sale business is sustainable, however. A lot seems to be dependent on staff goodwill – people are doing stuff that they’d not normally put up with, such as free local deliveries, because they know they need to engage locals and keep the business moving during the crisis. Once the crisis (we hope!) winds down there’s going to be a lot of social debt to pay off, never mind all the financial debt.

All in all, while I’m really looking forward to my first cask beer in many weeks – assuming reopening does indeed happen – I am definitely NOT looking forward to seeing how the fallout from the crisis hits the beer business over the coming months.
at 11:45 pm