It's stout Jim, but not as we know it: Durham White Stout

White Stout is the ultimate beer in our "White Range". While the word "stout" has come to mean a dark beer, the original meaning was strong and true. Before the porter brewers commandeered the word to mean a stout, or strong, porter, it referred to any strong beer. We have rehabilitated and improved the genre. White Stout is a very pale, full bodied, strong beer. American Columbus hops are used throughout to give massive floral and resinous character. At a strength of 7.2% this is a true stout. Indeed, few modern stouts of any colour are true to the word for strong. 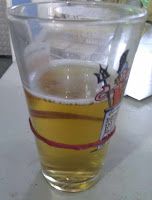 A golden ale of considerable strength and matching hoppiness, this is quite a beer. It even feels heavy in the hand, as it yields up aromas of peachy malt and citrussy hops, before becoming simultaneously floral, dry-malty and bitter in the mouth, and then leaving you with a moreish peppery-bitter finish. It's all rather nice and disturbingly drinkable for 7.2%...

But what is it? Beer aficionados seem confused and unimpressed by the brewery's explanation, as copied above. Untappd users have instead unilaterally declared it to be an Imperial Pale Ale, while Ratebeerians listed it as an English strong ale. Enter it for one of the American beer competitions, with their rigid style guides, and they'd probably have kittens.

Yes, “stout” originally just meant strong, but in the beer world was it commonly used for anything other than Porter?
at 7:32 pm