It's not often that I get a bottle of ale in the post – and while I'm here in Germany it will probably be even less common! So it was a very pleasant surprise to receive a carefully-wrapped bottle of Old Worthy Scottish Pale Ale just before we left London. 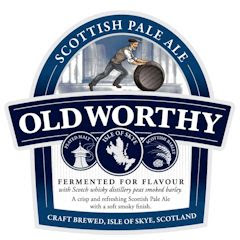 It's all part of a promotion for a new brewer on the Isle of Skye, although until it gets its own kit set up, Old Worthy Brewing Co. is contract brewing on the 20-barrel plant at the Isle of Skye Brewery. The bottle was a gift from Nick Ravenhall, who set up Old Worthy to create a distinctively Scottish beer, made with a portion of peated malt as whisky is – but not trying to go down the barrel-aged route. It's also the only beer Old Worthy will offer, at least for now.

Scotland has a great brewing heritage – back in Victorian times it was a big source of Pale Ale for the India trade (IPA, in other words – which also makes this my IPAday post!), albeit mostly from Alloa on the east coast, not Skye on the west. And whisky starts its life as ale, although it is not hopped. Old Worthy, which claims to take its name from the “old worthies” who worked at the distilleries, adds both hops and a touch of honey.

The beer pours a medium-gold colour with a big foamy white head, and yes, there's the honey and a little smoke on the nose, along with a touch of biscuity malt – Maris Otter is the variety used – and a faint note of dry hay from the hops. In the mouth, there's more malt and honey, juicy to begin with but rapidly turning drier, the hops then come through more strongly in a dry and faintly spicy aftertaste. The smokiness comes through again at the finish, but it's quite restrained, and all in all Nick's achieved a very nice balance here. My only reservation is that my sample was a bit gassier than I like.

Nick's also been promoting Old Worthy to craft beer fans in the Nordic countries – in fact by the look of it it's gone on general sale there about a week earlier than its UK retail launch, which is due next week. (I'm hoping that means it'll be at the Great British Beer Festival, like me...)
at 9:47 pm