Murky beer at Fuller's - and it's deliberate

Last week I accidentally found myself at the launch of a new beer. There I was at the Fuller’s brewery for a very interesting seminar on re-creating historic beers (of which, more later), when a brand new beer was announced – and it wasn’t a Fuller’s brew, either!

Brought up from Bristol specially by Moor Beer Co’s head brewer Justin Hawke, Relentless Optimism was immensely fashionably – and very appropriately, given our location in a real ale heartland – available to taste in cask-conditioned, keg-conditioned and can-conditioned form. Once CAMRA’s technical group catches up (and they’ve already validated keg-conditioning), all three formats will be acknowledged as real ale.

It’s a three-way collaboration between Justin, his guest Fernando Campoy of Spain’s Cerveza Domus, and Fuller’s John Keeling. It seems Justin and Fernando decided to brew a "non-traditional" interpretation of ESB, and thought who better to ask for advice than the man whose ESB is that rare thing – a brew that founded an entire new style of beer.

“They contacted me because they wanted to make an ESB, and they thought I might know something about it,” John joked. “So one Saturday I got the train down to Bristol and helped them brew one.”

“We wanted a modern twist on ESB,” Justin added. “It’s unfined because that leaves more flavour in the beer, and we worked with some modern British hop varieties – Admiral, Minstrel, Keyworth and UK-grown Chinook. We used a traditional ale yeast too.” 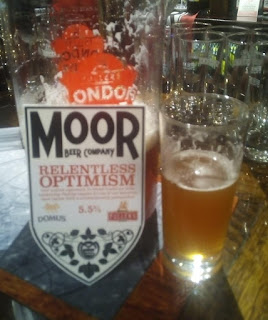 So what’s the beer like? For a start it was cloudy in all three formats – not quite Bristol Murky, but close! It looks and tastes quite different from Fuller’s ESB, yet you can see similarities in how the toffeeish malt balances the herbal and resinous bitterness.

It was also very interesting to see how each serving format emphasised different aspects of the beer – as John said, the cask version had a bigger mouthfeel, while keg dispense emphasised the hops a little more. Some people preferred the can-conditioned version though, perhaps because it came somewhere in the middle – a nice bright hoppiness, but still with that caramelly body and a decent alcohol warmth.

John said Fuller’s will buy some casks of Relentless Optimism and release them to some of its pubs, though he added that “It will be a step forward for some of them, because they won’t be used to hazy beer. We generally prefer finings because our customers expect it.”