I’m a couple of weeks late saying it, thanks to paid work intervening, but this year’s Craft Beer Rising was a blast. Despite the fears of some, who thought high cost of booking a stand and the increasing presence of Big Beer would dumb the event down, there were interesting new beers and brewers from all over the world, all eager to offer their brews to a thirsty British audience.

I especially liked the layout – all the beer bars in one long room, plus a second room for Cyderspace, the "Craft cider" section, and then another room for the music and stuff (of which there was none during the trade session). There was yet another space for talks and food, but I had enough to do in the main space and never got that far!

If there was a problem, it's that there was too much to explore in just a few hours. I started by the entrance and then worked my way around the outside – there were two long double-sided parallel rows of bars down the middle of the hall, plus more all around the edge of the room. OK, so I did spend a fair bit of time at each stop chatting to the exhibitors, especially the overseas ones to learn more about where they came from and their home market, but I ran out of time before I got to visit most of the bars down the middle. 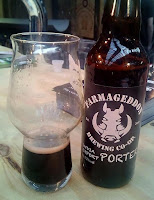 Although I did visit a couple of brewers I knew that had new beers to try, all the rest were breweries I'd never met before, and mostly ones from overseas. The first of these visits killed three birds with one stone, because it was a bar shared by three brewers, all from Northern Ireland – and with a three-way collaboration IPA on tap to boot. Each of the three has a bit of a speciality: Farmageddon tends to hoppier beers, Hillstown to Belgian styles (although it started brewing solely for its beer-fed Wagyu beef cattle!), and Pokertree to Irish styles.

It seems like the craft beer scene isn't taking off in Northern Ireland anything like as strongly as it is south of the border though, thanks in large part to the alcohol laws having been written by Presbyterians who'd prefer it 'dry'. A particular bone of contention is that 2016 is NI's Year of Food & Drink, yet the threesome told me that small brewers are largely shut out. Not only does Big Beer already have the main events and much of the licensed trade sewn up, but NI law makes it impossible for the new brewers to sell direct, which means they can’t open brewery taps to pull in the tourists, or even sell online.

And yes, Big Beer was also at CBR in volume – though mostly incognito. For example, the Backyard Brewery turned out to be Carlsberg Sweden in crafty guise, Marston's was there as Revisionist Brewing, Diageo/Guinness as The Brewers Project, and Goose Island was one of I think several AB-Inbev properties present.

On the other hand, it was interesting to see that even UK microbrewers are now getting into the craft beer import business. London's Truman's is now distributing Lonerider from North Carolina, for example, while I was told there are family links between Charles Wells and South Africa's Devil's Peak Brewing Co, whose beers Wells is going to bring in. It turns out South Africa is an interesting – in the Confucian sense – market for microbrewers. It is largely sewn up by SABMiller (SAB of course stands for South African Breweries) which also owns all the South African hop farms!

Gradually though the SA micros are converting drinkers away from the ubiquitous yellow fizz – Devil's Peak has a pretty toasty and fruity IPA for instance. However, it looks like Wells will lead in the UK with Devil's Peak's 4% craft lager, a sessionable and inoffensive brew that apparently hits an emerging sweet spot in the UK market – think Beck's Vier and Holsten Vier, I guess.

It wasn’t all foreign beer though. Next to catch my eye was Peterborough’s Nene Valley Brewing which is one of a growing number of breweries making gluten-free beer – indeed, brewer Paul Woodcock said that all NVB beer is now gluten-free. He doesn’t use alternative GF grains such as sorghum to make it, either. Instead it is deglutenised during fermentation by a special enzyme, taking it to less than half the 20ppm cut-off point that the law defines for ‘gluten-free’ labelling. And to judge from Release the Chimps, NVB’s fresh and fruity American IPA, there’s no reason to miss gluten. 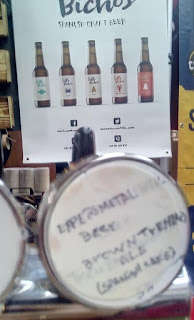 It was off to Spain next, but not one from the established craft beer heartlands of Barcelona and Madrid – Mateo & Bernabé is from the famous wine region of La Rioja, and it makes use of the fact in several of its beers. These include its dry-sweet and winey Little Bichos Spider, which is an 8% Porter aged 10 to 12 months in wine barrels. “It goes in black and comes out deep mahogany,” said M&B’s international rep Dominic Lombard.

Also barrel-aged but this time in Pedro Ximinez sherry barrels, is Little Bichos Mosca IPA PX. This time the result has almost Lambic aromas and dry bitterness, with sweetish sherry notes. Barrel-free but still unusual was a brown ale brewed with a local rum & raisin cake called Trenza added to the boil. According to Dominic, Spanish consumers like to look for something a bit out of the norm, though he added that many people only accept that Spanish products are good when someone abroad validates them, which is why M&B went first for the export market – it exports 98%, he said.

And they claim that the brand name is not as rude as it sounds to an Anglophone. Bichos is local dialect for a small creature (in Portuguese it means vermin!) which is why all the labels carry animal pictures – there’s a spider, a moth and a crab, for example.

Next stop was back in the UK, and a part of the country I know fairly well. Electric Bear Brewing might sound and look American, but is actually from Bath – although brewer Guillermo does indeed hail from North America, being from Mexico. It was also one of relatively few bars present to be pouring cask beer as well as keg. The beers I sampled were good, one of the stand-outs being his Samurye, a complex winey and almost Saison-like beer brewed with 50% rice in the grist and a Sake yeast.

We also talked about his Heisenberg’s Double Decoction, a Doppelbock produced as the name suggests by the classic Continental decoction method, where the mash is heated by moving a portion of the wort to a separate kettle for boiling, then returned to the mash tun to share its heat with the rest of the brew. Even in Germany, while some still swear it produces better beers, many have given it up as too awkward and moved to infusion mashing as used elsewhere.

And as Guillermo admitted, doing it on the wrong brewkit was even more awkward. “Engineering a double-decoction mash in a traditional English brewkit with an infusion mask tank was a labour of love,” he signed. “It was one of my famous hours!” The result was not exactly refined but was otherwise pretty authentic – rich amber, with dusty toffee notes and hints of peach and strawberry.

I already mentioned the Backyard Brewery that turned out to be the 20 hectolitre pilot brewkit in Carlsberg Sweden’s Falkenberg Brewery. They’d brought over cans of The Bee 17 (Bomble Bee 17 in Sweden) which is allegedly a dry-hopped Pilsner though it’s more like a faintly honeyed Eurolager, and Lawnmower, a sweetish and lightly toasty amber lager. More interesting than macrobrew for sure, but very much a big brewer trying to do crafty. 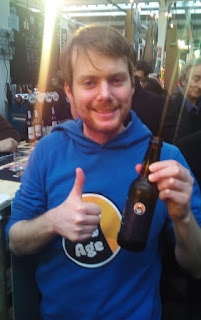 The one other foreign beer scene I learnt a bit about was Austria, thanks to a chat with Michael of Vienna’s Brew Age. I was intrigued to learn that not only are some of their traditional beer styles different from the German equivalents, but that Austria never had a Beer Purity Law as such. Instead, its brewers are preexhibitotty much in the position that many in the anti-Reinheitsgebot camp want for Germany, which is that if an ingredient’s safe and legal in food, it should be OK in beer too.

So while artificial additives are banned (and no, I don’t yet know how they’re defined), things like honey and fruit are allowed. Michael said they can even use up to 25% of adjuncts without having to declare it, although he added that most small brewers are proudly all-malt. As in most of central Europe, the craft beer scene there is very young – he reckons it only took off three years ago. Inevitably there’s plenty of beers styled after American IPA and Pale Ale – Brew Age’s Hopfenauflauf (Hop Casserole) was a drinkable and pleasant example of the latter.

They’re also experimenting though. For instance, Brew Age’s excellent Dunkle Materie (Dark Matter) is presented as a Black IPA but comes over more as a hybrid of that and a Munich Dunkel, beautifully rich and marrying its bright hoppiness with roast coffee and dark chocolate.

Amusingly, the last unfamiliar beer to catch my eye as the festival session ended was almost the opposite: Fireweisse is a German style brewed in West Sussex. It’s from Firebird, a brewery that’s only three years old but has a long heritage – it's the latest project of career brewer Bill King, formerly of King & Barnes and then WJ King. Fireweisse’s texture nodded slightly more towards ale (interestingly, this was also true of the American Hefeweizen from Lonerider, mentioned above) but it was otherwise a sehr typisch Hefeweisse, crisp and dry-sweet with banana and bready notes.

So that, mostly, was my time at the London Craft Beer Rising this year. I learnt (and enjoyed it) a lot, with my one caveat being that I was there for the trade session and could not get to one of the public sessions. As a result I found myself wondering (as fellow blogger Sophie Atherton did) whether it would have been as much fun if I was there as a paying punter.

Did you go to one of the public sessions, and if so, what did you think? Were you able to explore and learn, or was it a fight to get to the bar?
at 12:34 pm