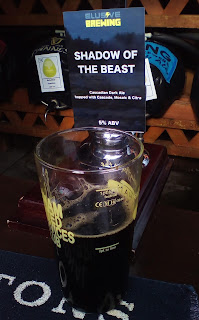 It's the 24th Egham Beer Festival this weekend - it's not 24 years old, mind you, they get the number by holding it three times a year. If you're in the London area I thoroughly recommend it. It's held in the Egham United Services Club, which is just a short walk from Egham BR, and it's all real ale (there's a discount on entrance for CAMRA members). There's eight ales on handpump in the club itself, with dozens more on handpump and a gravity stillage in the yard out back.

One of the things I like about it is that it usually features an excellent variety of beer, including several rarities or festival specials - this year there were two or three breweries I'd never even heard of before! The other thing that marks it out, but I hadn't quite put my finger on until now, is just how well kept the beers are. Even the stuff outside is usually in tip-top condition. Sure, there's the occasional duffer, but they're a tiny minority.

My favourite beers of the festival were all London or Thames Valley brews, as it happens. Husk Pale, from Silvertown in East London, was peachy-malty with hints of white wine and an astringent bitterness. Shadow of the Beast from Elusive Brewing, a very recent start-up located near Siren Craft Brew in Finchamstead, was a gorgeously rich Black IPA, burnt-bitter with treacle and pine notes, and Dove Tree was a fascinating collaboration brew from two of my 'locals', Park Brewery in Kingston, and Kew Brewery - badged as a White IPA, it had aromas of peach and bergamot over a dry-bitter yet creamy-textured and fruity body.

The only regret was that some of the most intriguing beers in the festival programme had not yet been broached when I was there on Friday afternoon. The festival runs until Sunday though, so you may still have a chance to catch them!