The march of the little brown bottles 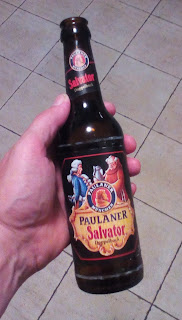 A seismic change is underway in the German beer industry, and few things demonstrate it as clearly as this: the original doppelbock, the classic Paulaner Salvator, is now in 33cl bottles.

The standard size for Salvator, like almost every other German beer, has been a half-litre bottle - or latterly for some, a 50cl can. There were a few exceptions - Einbecker for instance, with its stumpy 33s, the flip-top 33s of Flensburger, and of course the little green bottles of Becks - but at least they had an individual look. But more and more now, instead you see the brown long-neck 33 that's become an international standard.

It certainly looks like the Craft Beer revolution over the last few years in Germany has played a big part in this change. Perhaps to position their beers more as connoisseur items, or maybe to disguise their higher prices (which, to be fair, are at least partly due to using more and higher-quality ingredients), the new-wave craft brewers have generally preferred the smaller bottles. And when the macrobrewers went crafty, such as the cloudy brown Kellerbiers of Köstritzer, Krombacher and others, they too went into 33s.

That the German macrobrewers are also now shifting their mainstream products - some Pils brands have been available in both sizes for a while, but only a few - is telling. Again, part of it will be to increase revenues - selling a 33 for 99 cents is €3 a litre, versus maybe €2.20 a litre last year.

Another part though will be the changing expectations and preferences of drinkers, especially as beer becomes less of a generic commodity and more individual. Few people want to quaff a half-litre of something special; instead we prefer to savour something more like a half-pint, which for the Imperially-challenged is 284ml.

My one sadness in this will be if it turns good beer into less of a sharing experience. A 50cl bottle can easily be shared between two or three, or four at a pinch. Try sharing a 33 four ways and you start to look like craft geeks at a ticker-fest...
at 10:10 pm