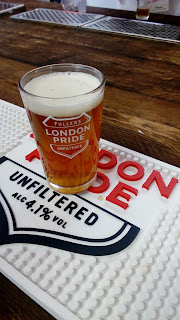 When I first heard about the launch of London Pride Unfiltered at Craft Beer Rising earlier this year, my first thought was, oh-ho, a hazy rebranding for the craft generation. But could Fuller’s make the idea work, or would it be like an embarrassing parent trying to be hip? And was it just a rebrand, or a genuinely new beer?

I had all those questions in mind when I got the chance for a brief chat with Fuller’s head brewer Georgina Young – over a couple of glasses of Pride Unfiltered, naturally!

First, a bit of background – I’ve seen this sort of relaunch several times before, especially in Germany, where the marketeers have done a great job persuading the average Josef that all beer is yellow, fizzy and clear as a bell. The industrial Pils that you see advertised everywhere, in other words.

But for the Craft Bier pioneers a few years ago, this heavily-marketed industrial Pils was the enemy, and the easiest way to state your non-industrial credentials was to make cloudy beer instead. Cue lots of murky unfiltered Pale Ales, IPAs and others.

The German industrial brewers seem to have caught up much faster than the UK ones, with Naturtrüb (unfiltered and cloudy) Kellerbiers and others widely available there for a couple of years now. (Amusingly, many of the German craft brewers have now swung the other way, producing clear as a bell dry-hopped Pilsners and the like.)

The first thing George pointed out was that Pride Unfiltered is hazy, not murky or cloudy. More significantly perhaps, it needs to be reliably hazy – consistency is absolutely essential for a brewer such as Fuller’s.

“It’s really hard to get this level of haze just right,” she said, adding that “The haze is not yeast, it’s protein – quite fine.” She also stressed that while the basic recipe “is pretty much the same” as regular Pride, including Northdown and Challenger aroma hops, there are changes. Most notably that Unfiltered is also dry-hopped with Target.

Not too surprisingly, Unfiltered is very like regular Pride, but is drier and less malty-fruity, although that will in part be due to the lower serving temperature. There’s earthy and spicy hops on the nose, then it’s lightly fruity and dry.

And it seems to be doing well – on a recent visit to a Fuller’s pub which had Pride Unfiltered on tap alongside a couple of guest keg pale ales, the barmaid said it was pretty popular. The notable thing is it’s definitely not aimed at the keg Pride drinker, and indeed the Fuller’s folk say there’s no plans to replace keg with Unfiltered.

George also had some news about the Fuller’s beer range continuing to expand. “We’ll do eight new beers this year, four of them cask, plus Unfiltered of course,” she said. “We also have seasonal cask and keg beers and then monthly specials.”

They’re also increasing the range they distribute from other breweries, with Sierra Nevada the most prominent example. One of Fuller’s sales team noted that “We brought over 14 Sierra Nevada seasonals last year, this year there’s six definites plus maybe two or three more. This year’s list include Otra Vez, Sidecar and Tropical Torpedo.” Yet more reasons to visit the bigger Fuller’s pubs – although I don’t expect to see these in my local.
at 11:20 pm