Jubel gets crafty with the lager-top 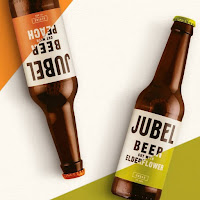 Maybe you already saw Jubel’s attractive bright-yet-minimalist labels on the shelves in Sainsbury’s, but like me, you weren’t convinced by the idea of sweetened, fruit-flavoured beer. Flavoured beer is quite traditional though in some ways and places, so I was pleased when one of my local pubs announced a meet-the-brewer visit from Jubel Beer.

We had two varieties to taste, Alpine which is peach-flavoured, and Urban which has elderflower syrup added. They had just launched a third, Grapefruit, but it hadn’t reached London yet. I tried the Urban first and was pleasantly surprised. Yes, it’s sweet – much too sweet for my liking – but the elderflower adds an intriguing grape-like note, with the result ending up like a cross between lager and a sweet white wine.

Alpine is less subtle, with in-your-face fruitiness and the rather light base-beer almost lost in the background. “Craft beer is all the thing now, but it’s too hoppy for some,” noted Jubel rep Adam, which I’m afraid I translated as ‘This is beer for people who don’t actually like beer, but still want to be seen drinking it.’

Everything has to have an origin story these days, it seems, and as Adam explained, this one involves two students on a skiing holiday in the French Alps and encountering Demi Pêche, which is the local variant of a lager-top – beer with a dash of peach syrup.

He says they came back to London and, after graduation, initially tried renting brewing capacity and making something similar using peaches in the brew. That didn’t work well though, so they decided to make their own peach syrup. They added this to a contract-brewed gluten-free lager – one of the two founders is Coeliac, says Adam – and sold the result in bottles. (There’s also a YouTube version of this story.)

So why was I meeting Adam, who’s actually on the sales side, covering London and the South East, rather than one of the founders? That was down to their need for more production capacity and money for expansion, both of which came from picking up the whole operation and moving it to Cornwall, landing in Penryn, near Falmouth. This is just 20-odd miles from St Austell Brewery, and it helped them get a grant from the EU’s European Regional Development Fund, one of whose aims is to boost the economies of places like Cornwall.

A launch across the south-west of England followed, and then a listing with Fuller’s (we were talking in The George IV, a big yet cosy Fuller’s pub in Chiswick). And then late last year came the big one – a nationwide launch in 600 Sainsbury’s shops.

Should you buy some? Well, if you or your friends are sweet-toothed and enjoy drinks such as the mixes of beer and fruit juice* produced on the Continent – and especially if they are Coeliac too – then give them a go. The elderflower one could also be interesting for anyone who like sweet white wines and wants to try something a bit different.

*Note that these are fruit-flavoured drinks but they are not ‘fruit beers’, as the fruit is not there during the brewing or fermentation. They are closer to shandies, or what the Germans more practically call a Biermix.
at 12:53 pm