How can Innis & Gunn be both barrel-aged and available everywhere?

It’s rare to visit a brewery these days that doesn’t have a barrel-ageing programme of some sort. It might just be a dozen or so wooden casks stacked up in a corner, or it might be a dedicated storeroom or even a whole warehouse full of casks. For most though, barrel-aged beers are specialist small-batch products – a whisk(e)y cask is two hectolitres, and ought to yield enough to fill between 500 and 600 33cl bottles.

That’s scalable to hundreds of casks and hectolitres, which is tolerable for those speciality beers (700 hl of Duvel BA, say, or Goose Island BCBS). But what if your annual production is heading for 150,000 hectolitres, and you need to barrel-age pretty much all of it? If you’re Dougal Gunn Sharp, the boss of Scottish brewer Innis & Gunn, it means applying some science…

To start with, they developed the Oakerator, which circulated beer through treated oak chips in a tank. Then two years ago they switched back to using real Bourbon barrels – but barrels that had been broken into their staves, then turned into wood chips and toasted to differing degrees to “open up the wood” and yield different flavours. Both methods resemble the oak-chip techniques used by some large wineries and are used for the same reasons – to do more, and faster, with less wood. Though because in this case the brewers are also looking for Bourbon flavours, they don’t even have the option to use large wooden tanks.

Once the beer is on the barrel chips, “We apply different temperatures and pressures to get different flavours in, such as that Bourbon vanilla note. It’s like using a pressure cooker,” explained Dougal when we met at an Innis & Gunn beer matching evening in London last month.

“We know exactly where we want to be, the flavours we want,” he added. “We’re about warm, smooth characteristics, but not too many of them. The starting beer is something of a blank canvas – not too hoppy, and brewed with our own yeast, selected for the flavours we want.”

Along the way, they have learnt a lot about what works when it comes to barrel-ageing. “For example, barrel-aging goes better with some styles than others – it needs some ‘weight’ to carry it,” he said, adding though that you don’t want to overdo it. As a result, most Innis & Gunn beers have quite a short aging period: “We don’t need longer than 5-30 days, though we could go to months [for certain beers]. 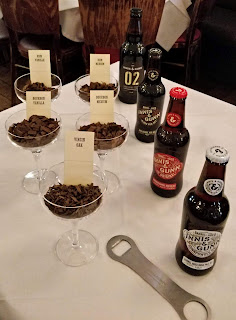 “The timing also depends for example on the time of year – it really is quite a scientific process. The right flavours for us are vanilla, toffee and so on – once you leave the beer longer it begins to change and you begin to round off some of the more robust characteristics. The key thing here is to be able barrel-age a beer that isn’t 10 or 11%, without having to liquor it down.” (That’s to say, without having the aged version come out at 11% and then blend it down to a more saleable strength.)

The Innis & Gunn story combines serendipity with family history – Dougal’s father Russell was the head brewer who rescued Caledonian Brewery. Russell Sharp also had extensive experience in the distillery business, and he founded Innis & Gunn with his two sons – its name comes from their middle names – as a joint-venture with whisky producer William Grant, shortly before Scottish & Newcastle took control of Caledonian.

William Grant wanted ale to ‘season’ Bourbon casks before they were used to age whisky, the original plan being that the beer would then be disposed of. But workers who tried it liked it, and so a new business was born, one which is now run by Dougal after a management buyout a decade ago.

Looking back to when it all began , Dougal said that one thing the founders realised was that while a good product was essential, it wasn’t enough. “Beer at the time was unsophisticated compared to the wine industry,” he explained. “So we made it look different, and we got people to realise it wasn’t beer for just chucking down [your throat].” And it has to be said that they did a great job of getting the presentation right, from the name to the bottle designs.

Science for volume, age for speciality

The scientific approach has also enabled Innis & Gunn to considerably ramp up production – the company now produces six regular beers, of which only the lager is not wood-aged, plus a number of seasonals and specials. Most if not all of the latter are still aged in actual barrels, and many are primarily or exclusively for export, such as Vanishing Point, its delicious 11% Imperial Stout, which gets 12 months in first-fill Bourbon barrels.

The company currently contract-brews its volume brands at the Tennents brewery in Glasgow. However, for pilot brews, smaller runs and cask ales it has a 50hl brewkit at Perth-based Inveralmond Brewery, which it took over a few years ago. More ambitiously, it also has a £20 million project to build a new brewhouse in Edinburgh – part funded by private equity and part by crowdfunding – with the aim of bringing all production back in-house.

Whatever you think of the idea of using toasted barrel chips instead of real barrels, the resulting ales are both good quality and undeniably popular. They sell well not just in the UK but also in export markets, most notably Canada where it’s the number one imported craft beer*, but also in Sweden, the US, and elsewhere. Quite a success story both for beer and for barrel-ageing.


*In fact it’s so popular in Canada that the Innis & Gunn earlier this year announced plans to brew and keg several of its core beers at Brunswick Brewery in Toronto, using the same recipes, ingredients and processes as in Scotland. The two breweries have already worked together on a couple of collaboration brews, and plan to do more of those too.
at 9:30 am