Trebles all round for music-themed Signature

When I first came across Signature Brew, with its music industry-themed beers, I confess I thought it was a gimmick. I assumed it was another of those generic "Rock Pale Ale" type beers, contract-brewed and labelled with the name of a venue or a music promoter. And indeed, it did indeed start out by doing  collaborations with bands I'd never heard of, creating beers that were nomad-brewed at places such as Titanic and London Fields, and which never appeared anywhere I went drinking or beer-shopping.

It wasn't long before I realised my mistake. As time went by, I encountered more and more of their beers on sale – some were even cask-conditioned, glory be!! In the process, I discovered that they were accomplished core brews that were branded for Signature itself, not for a band.

They all still had music-themed names though – it turns out Signature's founders come from the music industry, hence the brewery's tagline (hey, everybody has to have a tagline these days…) of "Brewing with Music."

Then this year, two things happened on the exact same day in March: first, the news came that Signature had won the 2018 Brewery Business of the Year award from the Society of Independent Brewers, and second, I encountered Anthology, their stunning 10% Imperial Stout, on draught at the London Drinker Beer Festival. I realised that this was now a real brewery, with real brewers – and with real ambitions! 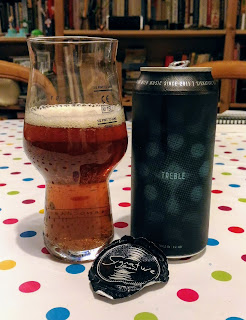 So when the brewery's publicity chap got in touch with news that they were launching a 9.4% Triple IPA called Treble, and would I like a sample, I was intrigued. Well, OK, there may have also been elements of "Are bears Catholic?" and "Does the Pope...?"

When the beer arrived, he'd kindly added a few more samples, including one of Anthology. Perhaps to cock a snook at the beery establishment and the neo-Puritans, while the regular Signature Brews are now in 330ml cans, the specials are in 440ml 'extended editions' – yes, almost half a litre of Triple IPA goodness!

And very, very good it was, too. Treble's an almost glowing amber-brown, with a fine head and aromas of pine resin, touches of onion skin and toasted orange, and a hint of mango. At first it's rich and malty-sweet on the palate with dark marmalade notes, then drying resinous hoppiness and alcohol slide in. The bitterness is there, but pretty moderate in context. Lovely! (If you'd like some, it looks like it's still available, despite its 'special guest' status, as there's still check-ins popping up on Untappd.) 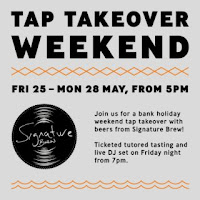 He also sent news of the latest band collaboration brew – yes, they're still doing them, this one is a Grapefruit Sour created with London alt-pop outfit Banfi. I love both good sours and grapefruit, but sadly couldn't make it to the launch event.

If you're in London over the coming late May bank holiday weekend though, you can catch up with Signature Brew at Mason & Company in Hackney Wick. There's a Signature tap-takeover all weekend with seven beers on, and on the Friday night there's also a tutored tasting of five beers – that last bit is ticketed and will cost you £11.37 (weird price, but it includes a booking fee). By chance, I noticed that the place currently has that Grapefruit Sour on tap. Hmm...
at 9:53 am